Katamari Forever, known in Japan as Katamari Damashii Tribute (塊魂TRIBUTE), is the fifth main entry in the Katamari series. The game was released for the PlayStation 3 in Japan on July 23, 2009 and in North America on September 22, 2009. A demo of the game became available on the Japanese PlayStation Network on its Japanese release date.

Katamari Forever contains a mix of 30 levels, with some being brand new and some being levels from previous titles in the series. Older levels take place within the mind of the King of All Cosmos, who gets knocked in the head and suffers from amnesia. The levels are black-and-white in appearance, and the objective is to roll up junk to bring color back to the stages. New stages take place in the present, where RoboKing, a giant robotic version of the King of All Cosmos created by the cousins, goes on a rampage and destroys all the stars in the sky. The objective of the new levels involves creating stars by rolling up junk as in previous Katamari Damacy games. New additions to the gameplay include: the "Prince Hop", which allows the Prince to jump into the air by flicking the controller up or pressing a shoulder button; and the "King Shock", which sucks nearby objects onto the Katamari like a magnet. The main hub for this game is The Village Square.

The game utilizes a full high-definition video format. In addition to graphics in the original style of Katamari Damacy, the game allows the players to select graphic filters such as cel-shaded, colored pencil or wood grain graphics.

Katamari Forever is also said to include the feature of unlocking PlayStation Home Rewards through gameplay.

Some of the items will include a t-shirt with a miniature Prince attached to the shoulder. Other cousins with other shirts will be unlockable for male and female avatars.

Katamari Damacy Tribute Original Soundtrack: Katamari Takeshi is the soundtrack album for the game.The music for the game includes a number of remixed tracks from previous iterations of the series, using a combination of "electric" and "organic" sounds according to the sound director Yuu Miyake. Miyake employed the help of other Japanese artists and remixers to help the soundtrack. The soundtrack is due for release in Japan on August 19, 2009. It will include a total of 36 tracks spanning two discs.

Katamari Forever received a 33 out of 40 by Japanese gaming publication Famitsu. It was the 6th best-selling game in Japan during the week of its release, selling 28,000 units. In America, IGN awarded the game a 7 of 10 noting that the game still suffered from many of the issues that plagued past entries in the series. PixlBit awarded the game 4 of 5 stars recommending the game to both fans of the series and newcomers alike.

Arguably, the stages in the game are 95% composed from its prequels. Only three were taken from Katamari Damacy, and the rest were mostly made up of Beautiful Katamari and We Love Katamari stages. No stages from Me & My Katamari are available, possibly due to the difficulties in changing from PSP graphics to PS3 graphics. Only three new stages were introduced in the game. 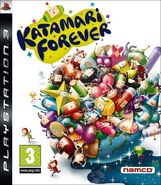 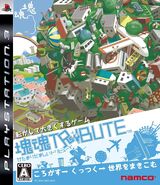 Japan cover
Add a photo to this gallery

Retrieved from "https://katamari.fandom.com/wiki/Katamari_Forever?oldid=15945"
Community content is available under CC-BY-SA unless otherwise noted.