Beautiful Katamari has gained extra attention because it was originally scheduled as a PlayStation 3 title in addition to the Xbox 360, but development on the PlayStation 3 was abandoned. All previous Katamari games have been exclusively available on Sony consoles (PlayStation 2 and PlayStation Portable). Along with the full version of the game is a free, downloadable demo for Xbox Live. While classic elements of the Katamari series return intact, new modes and items have been added.

Typical gameplay screenshot The core gameplay from the "Katamari Damacy" series is unchanged; the player, as the diminutive Prince, controls a "katamari" to collect objects smaller than the katamari, causing the katamari to grow and collect even larger objects, as to meet various objectives given by The King of All Cosmos. After successfully clearing any level once, the player can then attempt a time attack challenge on that level to make a katamari of a given size in the shortest time possible. Eternal modes, where the player is allowed to roll without any time limits, are available once a perfect score is obtained on a level.

In Beautiful Katamari, players are urged to build katamari with specific types of items. For example, to make the planet Mercury, the King asks the player to collect liquids. After successfully completing the task, the player is rated on time, size, and the number of objects meeting the King's request. Another level requires that the player roll up only hot items and avoid cold items to raise the katamari's temperature to 10,000 degrees Celsius.

Beautiful Katamari is the first game in the series to support high-definition television resolutions of 720p, 1080i and 1080p.Multiplayer modes include 2 player support on the same console and 2–4 player support over Xbox Live in both cooperative and competitive modes. One of the online battle types is a "Thingy Battle", similar to a mode in We Love Katamari, where each player must collect the most of a specific type of item Game lobbies include simple mini-games.

The game tracks all progress by the player in the various modes and shares this data through Xbox Live to allow the player to compare their performance to others, including on normal request levels, time attacks, and online play performance (tracked as "cookies" awarded by the King). A "worldwide katamari", representing the total size of all objects rolled up by all Xbox Live players and the player's contribution to that, is also available.

Players are able to roam The Princedom to select any levels.

In addition to the included stages, there are also downloadable levels available. Completing each of the new levels adds more stars and planets to the Cosmos, allowing for an even bigger Katamari to be constructed once the player reaches space in the Uranus level. Included in the downloadable content are other items that can only be rolled up in the new stages.

Some criticism has been spoken because of this. In order to complete the 1,500,000 Km Katamari needed to complete the game, all of the downloadable stages must be purchased and completed. These stages are also only a few kilobytes in size, and many complain that the additional levels could have been included on-disc. As a side effect of the downloadable levels not being included, it is impossible to unlock all items until the stages are bought, and the game cannot be beaten until they have been completed. The final achievement requires the player to "Purchase a DLC stage, and roll a 1,500,000 Km Katamari". This means for a player to unlock all achievements, they are required to purchase at least one stage.

Artist, designer, and creator of the previous Katamari Damacy titles, Keita Takahashi, is not involved with "Beautiful Katamari", which is directed by Me & My Katamari co-lead game designer Jun Moriwaki.

Early in 2007, various reports suggested that Beautiful Katamari was in development and may be released in North America in Autumn 2007. These reports were based on a United States trademark filing, retailer listings, and a reported announcement by Namco Bandai to retailers.

A demo was distributed in the September 2007 issue of Official Xbox Magazine and on the Xbox Live Marketplace on August 14, 2007. The demo spawns the player in one of several starting points in a single level with a three minute time limit and an 80 cm katamari. The main menu features the song Katamari Nah-Nah. The demo level contains a song called Katamari Dancing by Takashi Utsunomiya which is also the opening song.

A March 16, 2007 post at Orange Lounge Radio reported that Namco Bandai announced "Beautiful Katamari" to retailers, which included a release for the Xbox 360, PlayStation 3, and the Wii. According to the post, the PlayStation 3 version of "Beautiful Katamari"' was to feature support for the motion-sensing feature of the Sixaxis Wireless Controller. The post was removed at the request of Namco Bandai.

In mid-April 2007, the game was confirmed by Famitsu to be in development for PlayStation 3 and Xbox 360 in Japan, and officially announced by Namco Bandai Games America on April 20. Both versions of the game were stated to retain the dual analog control scheme of the PlayStation 2 Katamari games, and also include online play features.

Designer Jun Moriwaki stated in April 2007 that while a Wii version of Beautiful Katamari was under consideration, difficulties are presented by the system's controller that must first be resolved.

On June 29, 2007, IGN Nintendo editor-in-chief Matt Casamassina reported that according to unnamed sources close to Namco Bandai, the PlayStation 3 version of "Beautiful Katamari" had been cancelled due to porting issues and stalled PlayStation 3 sales, with resources being redirected towards the development of a Wii version. Namco Bandai was contacted for comment, but a statement was not returned in time for the publishing of the report. On July 5, 2007 Namco revealed their E3 2007 lineup, listing "Beautiful Katamari" as Xbox 360 only. On the same day, Famitsu reported that "Beautiful Katamari" has been cancelled for the PS3 and is currently in development for the Wii and Xbox 360.

The box cover image for the Xbox 360 version, released in late August 2007, indicates that the game is exclusive to the Xbox 360.

On September 11, 2007, Namco-Bandai's U.S. website briefly identified "Beautiful Katamari" as a title for the Xbox 360, PlayStation 3, and Wii, with the latter two platforms bearing a release date of "TBD." When asked by 1UP during the 2007 Tokyo Game Show, "Beautiful Katamari" director Jun Morikawa stated specifically that the game will not be available for the PS3, though another Katamari game that stars the King of Cosmos in the lead will make its way to the PS3 "soon". Morikawa also suggested the same for the Wii.

Namco released Katamari Forever, which shares some of its levels with "Beautiful Katamari", for PlayStation 3 in 2009.

The demo sticks the player in a level with a 1m Katamari. The King tells the player to "have fun," and sets the timer for 3 minutes. Despite being a relatively small level, it is entirely possible to get a Katamari over 6 meters, and even to roll up all items. Beating the level does not unlock anything more than some commentary from the King.

Like previous games in the series, its music was composed by a large number of composers: Yuri Misumi, Yuu Miyake, Akitaka Tohyama, and Yoshito Yano returned as previous composers for the series, and were joined by Rio Hamamoto, Yuji Masubuchi, Keiichi Okabe, Hiroto Sasaki, Tetsuya Uchida, and Ryo Watanabe. Yuu Miyake did not reprise his role as sound director for the game; this role was instead filled by Tetsuya Uchida. The music for Beautiful Katamari has been described as "the same sort of mix of J-pop, techno-infused jazz, and ambient electro" as that of the original game. Unlike Me & My Katamari, the majority of the music for the game was original, though a few tracks from earlier in the series were remixed. Katamari Suteki Damacy (塊ステキ魂 Katamari Suteki Damashii, lit. "Clump Lovely Spirit") is the soundtrack album for the game. The album has 17 tracks and has a length of 1:10:04; it was published by Columbia Music Entertainment on November 21, 2007 with the catalog number COCX-34602.

GameSpot, in their review of the game, termed the music "one of the quirkiest and most oddly listenable soundtracks in gaming", and said that it fit the mood of the game as well as the soundtrack to the first two games. Square Enix Music Online, in their review of the soundtrack album, said that while it had "a lot of original worth", that it was not any better than the first two soundtrack albums of the series and instead came across as more of the same. They termed the album overall as a "bit underwhelming" and marred by a few "dud" tracks The album reached #253 on the Japanese Oricon charts.

"Beautiful Katamari" received mixed reviews from critics. "Official Xbox Magazine" stated, "It clearly aims to include everyone and exclude no one, and that's just plain refreshing amid a holiday season stuffed full of deadly serious, high-learning-curve me-toos." IGN gave the game a 7.8 out of 10, calling "Beautiful Katamari" "a welcome addition to the barren category of family friendly games on 360," but also found fault in the game's short length and the lack of evolution in the Katamari series. Other critics lamented the lack of originality in "Beautiful Katamari". "Game Informer" Online called the game the "ugly duckling" of the "Katamari" series, praising the new multiplayer facilities but calling the environments "dull and lifeless." Import-centric UK site NTSC-uk gave it 6/10 saying "When throwing in the short nature of the game and the lack of loving care to the little things that seemed to be lavished on its predecessors... then fans of the series may be left feeling somewhat disappointed. Newcomers will no doubt discover the reason why so many people hold the series very dear to their heart..."

Eight new and fresh cousins are introduced in Beautiful Katamari. One of them is a seemingly smaller version of The Queen of All Cosmos. 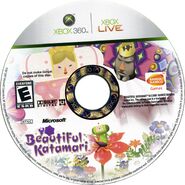 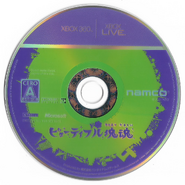 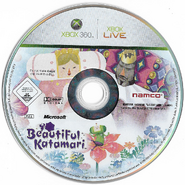 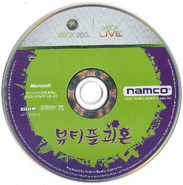 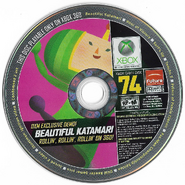