The Cosmos, also commonly known as Space, is where all of the stars and planets exist. Whenever a stage is completed, The King of All Cosmos judges the Katamari, and if it passes, is either turned into a celestial body or broken into stardust. Celestial bodies can be stars, planets, Shooting Stars, or other objects in space. It is also, quite obviously, the realm over which the King is king of.

The Cosmos is typically void of any objects at the begining of a game due to some catastrophic mishap that results in all celestial bodies to be destroyed. It is up to The Prince to fill the night sky with all sorts of celestial bodies to replace the ones that were destroyed before. Most games will allow the player to enter The Cosmos by traveling into space and are able view their progress with all the current celestial bodies with the player's current record if they wish to improve on their scores.

As seen in Touch My Katamari, the Cosmos is referred to the place in which the Royal Family resides, it's shown as a paradise Garden of Eden type place where animals of various sizes and all kinds of plants reside in peace, the Mushroom Castle is shown to be located here as well and the Solar System minus the Earth (since it's being used as a katamari). Most importantly, There is an area of the Cosmos that resembles the intro of Katamari Damacy and a area where The King sits on his heart chair like in We ♥ Katamari, there are also children from all over the world that stand in The King's greatness in the last area of the Cosmos, this area is called the Royal Garden. 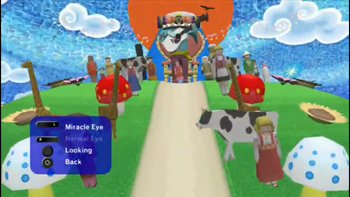 The Royal Garden as seen in the stage could merely be a recreation of the opening scene from Katamari Damacy, meaning that the original area is located somewhere in the Sunflower Continent and The King wanted to capture that moment as it holds a great importance to him.

Main Planets mainly compose of the eight planets of the solar system, with the exception of the Moon and Pluto.

Other Planets mainly compose of any other planet that is created besides the main planets.

Other Objects mainly compose of any celestial objects that don't follow any of the other categories.