Crossy Road is an arcade video game released on 20 November 2014. It was developed and published by Hipster Whale, with the name and concept of the game playing on the joke "Why did the chicken cross the road?" The game has been described as "endless Frogger."

The objective of Crossy Road is to cross an endless series of roads and obstacles as far as possible without dying. The player plays as a chosen character and must tap to go forward or swipe the screen in the appropriate direction to move the character horizontally. The game consists of an endless series of obstacles in a set path, such as rivers, cars and trains. The player must time movements correctly in order to pass these obstacles without dying. For example, in the instance of a river, the player must cross the river using floating logs, without landing in the water. If the player takes too much time crossing an obstacle, or goes idle, a bald eagle will snatch the character, resulting in the game's end. Every forward movement will earn one point, with every fifty points sounded out by an effect. Furthermore, there are coins scattered across the environment that can be used to make new characters playable.

The current iOS version of Crossy Road contains 262 characters, including the default, Chicken. Of those, 204 characters are unlockable through coins (the “prize machine”) and 46 are "secret characters". Another 12 characters are only unlocked with green “tokens” similar to coins except that they can only be gained by watching ads or getting in the top ten leaderboard for daily challenges. Currently, there are two characters, the Piggy Bank and Bashy Beaver, that can only be unlocked with cash or 10,000 coins. Future updates may invalidate this number, as new characters are added often. In addition, the Android version includes Android Robot, based on the operating system's Android logo. Other characters include Doge, Archie, Dark Lord, and #thedress, a female character wearing the dress of the same name. Various popular culture references and games are also included, such as Forget-Me-Not and "Emo Goose" voiced by Phil Lester.

The player is able to collect coins; an in-game currency, characterised by its squarish shape and red C in its middle. These are obtained in-game by collection during gameplay, watching advertisements, completing tasks, collecting a free gift given every few real-time hours, and using legal currency to buy them in various amounts. Coins are counted the top right corner of the screen. One hundred coins can be used for a chance at a new character from a lottery machine. If the player owns the Piggy Bank mascot, red coins worth five coins each are added to the game, and coins received from free gifts or watching ads are doubled.

Initially the developers planned to spend only six weeks developing the game, but afterwards realized the game's potential and dedicated another six weeks to completing it. The game's free-to-play model was based on the one for Dota 2. According to developer Matt Hall, Crossy Road drew inspiration from Frogger, Temple Run, Subway Surfers, Disco Zoo, Flappy Bird, Skylanders, Tiny Wings and Fez. The game's art style was created by Ben Weatherall.

Crossy Road had added four characters as part of it's 2016 Halloween Update, The Prince, The King, The Queen, and Princess were added as playable characters in the game. The Prince and Princess hold a katamari and are able to roll up objects, The Queen leaves behind a trail of hearts and The King can use the Royal Rainbow to change object's color into rainbows. An additional Katamari Chicken was added to the game and is seen in Tap My Katamari when the Crossy Mushroom is activated.

Three months after its initial release, the game earned over $10 million and had over 50 million downloads.

The King before every run.

The King using the Royal Rainbow on objects.

The Queen leaving hearts as she goes. 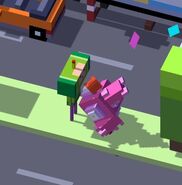 Using a Katamari in game.

The Prince holding a Katamari.
Add a photo to this gallery

In 2016, Hipster Whale and Disney Interactive Studios launched a spin-off video game called Disney Crossy Road on iOS, Android, Windows Phone, Windows 8.1, and Windows 10 devices. It features Disney characters like Mickey Mouse and Donald Duck, as well as some characters from numerous Disney franchises such as Zootopia, Big Hero 6, The Lion King, Tangled, Wreck-It Ralph, Moana, Pixar's Toy Story and Inside Out. In the game, there are at least 617 characters, with secret characters like Mortimer from the Mickey & Friends franchise and Lenny from the first Toy Story movie.

Retrieved from "https://katamari.fandom.com/wiki/Crossy_Road?oldid=15999"
Community content is available under CC-BY-SA unless otherwise noted.