Dipp is a cousin of the Prince, first introduced in Katamari Damacy, and appearing in all sequels as well. He looks like a disco ball who enjoys being noticed and loves to have fun. His overall appearance changes between Katamari Damacy and We ♥ Katamari. He's a funk music junkie who loves getting spotted. In the first installment, he appears with round strobe lights and in the sequels dons star-shaped strobe lights. He also changes to + shaped strobe lights in Me & My Katamari, but this is possibly just due to the downgrade in graphics. Also, his pants eventually changed from green to purple. This is strange,however, considering some games (like Katamari Forever) show Dipp with green pants in-game, but purple pants on art. This was likely due to poor communication and importing the models from past games. He and Peso go clubbing together.

Dipp's body is littered with polka dots and he wears green pants.

Dipp's body is now covered in stars rather than dots.

Dipp's body is now covered in pluses and not stars.

Dipp's body goes back to the polka dot pattern design.

Dipp wears green pants like in his original design.

Where/How to Find: Make the Moon - In the middle of the schoolyard, sitting behind the podium.

Description: He lives for attention and goes clubbing with Peso every night.

When Rolled Up: "Eek, it's Dipp. Why the lights? Are you that desperate for attention? How disturbing."

Where/How to Find: Fireflies - On top of the hill, on a tree stump surrounded by fireflies.

When Rolled Up: "Oh! You just rolled up something weird and blinky!! Wait... it's cousin Dipp. Oh, stop getting in the way!"

Stage Conclusion: "Oh, it's cousin Dipp. What were you doing on Earth? Hmm? You were surrounded by fireflies? We have no idea what you're talking about."

Where/How to Find: Zucchini Land - On a town atop the rive full of cargo containers right next to where you start into Sakura Town.

Description: A sparkling cousin. We wish he knew the difference between looking good and looking gaudy.

When Rolled Up: "Hmm... We feel something twinkly. It's cousin Dipp! Disco closed today?"

Cousin Leaderboard Description: A sparkling cousin. We wish he knew the difference between looking good and looking gaudy.

When Rolled Up: "Hm? Something flashy... It's Dipp! Didn't We ask you to do a world tour?"

Stage Conclusion: "A dash of the flash... The one and only Dipp! Report for emcee duty in the Princedom immediately."

Where/How to Find: Fireflies (Same as We love Katamari).

When Rolled Up: "Ooh, something stroby. It's just Dipp. Not even a firefly, boo."

Where/How to Find: 50 Item Special - On a balance beam, performing with some rubber people on top of the small raised area in front of the bear taking a picture of the peacocks.

When Rolled Up: "What's that shiny thing? Oh! It's Dipp! All those flashing lights are bad for our migraines."

Stage Conclusion: "We feel an eerie disturbance in the katamari... Aha! We knew it! Dipp was mixed in! How did you get there, we one?"

How to Obtain: Twenty fifth available cousin, he can be called for 30.00ff coins.

Description: He lives for attention and goes clubbing with Peso every night.

Dipp as he appeared in Katamari Damacy

Dipp on his ride

On his own island. 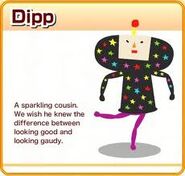 Dipp in the Danger stages.

Dipp in Touch My Katamari
Add a photo to this gallery
Retrieved from "https://katamari.fandom.com/wiki/Dipp?oldid=17233"
Community content is available under CC-BY-SA unless otherwise noted.