Fujio is a cousin of The Prince. He has been in every game since Katamari Damacy. He is blue with a cone head, which is apparently a mountain. His head is also an active volcano with sometimes lava coming out of it. Fujio's Sound

Fujio has a blue body with green pants. His head is cone-shaped, with lighter colors near the top, with his antenna at the tip.

Fujio's pants have changed to match the top part of his head.

Where/How to Find: Make Polaris/North Star - On top of the greenhouse beside the farm in town.

Description: One of the best-liked members of the Royal Family. But not a happy camper when woken up in the morning.

When Rolled Up: "Oh, Fujio! You have lava dripping from the top of your head. How disturbing."

When Rolled Up: "Oh!! You just rolled some weird mountain!! Wait... It's cousin Fujio. Oh stop getting in the way!

Stage Conclusion: "Oh, it's cousin Fujio. What were you doing on Earth? Hmm? You were climbing Mount Fuji? We have no idea what you're talking about."

Where/How to Find: Crane - Sitting on a storage shed near the bus.

Description: A cousin who We think has gotten older. The volcano on his head doesn't erupt often, but it's active.

When Rolled Up: "Hm? A bitty hirsute thing... it's cousin Fujio! Check out the stache'!"

Where/How to Find: Sunrise Castle - Once outside, roll straight through the grassy area. There is a pyramid of cinder blocks there and he is on top of it.

Cousin Leaderboard Description: A cousin with a monotonous voice. He isn't very interesting, but what a cool moustache!

When Rolled Up: "Hm? Something moody... It’s Fujio! Why aren’t you out finding yourself?"

Stage Conclusion: "Oo, a hint of moodiness... Fujio, naturally. There’s a theremin class at dusk I the Princedom."

Where/How to Find: Make a Star (Race) - Rolling a katamari around up near the house in the center.

When Rolled Up: "Something you rolled up looks ready to erupt! Oh, it`s Fujio. That mustache is out of sight!"

Stage Conclusion: "Sweet! You rolled up Fujio. I'll just put you in the Village Square."

Where/How to Find: Make it Big 8 - Running around a volcano in the final area.

When Rolled Up: "What do our kingly eyes spy? Oh! It's Fujio! He sure isn't getting any younger."

Stage Conclusion: "Goodness gracious! Look at this! Fujio is stuck on the katamari! It's dangerous for you to be here, little one."

How to Obtain: Thirteenth available cousin, he can be called for 54.00b coins.

Description: One of the best-liked members of the Royal Family. But not a happy camper when woken up in the morning.

Description: Fujio lets your facebook friends help you to get really far! The more friends, the more help you get!

Fujio as he appears in the original Katamari Damacy

Why don't we take these baskets and push them somewhere else!

Fujio & Slip in the Cousins stage.

Fujio where he belongs.

Fujio relaxing with a cup of tea. 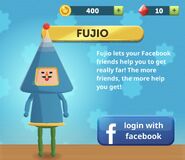 Add a photo to this gallery
Retrieved from "https://katamari.fandom.com/wiki/Fujio?oldid=17230"
Community content is available under CC-BY-SA unless otherwise noted.