Jungle is a cousin of the Prince, who is first introduced in Katamari Damacy, along with the rest of the sequels with the exception of Touch My Katamari. In Katamari Damacy, Jungle originally had a camouflage pattern, but in the sequels he blends in with what is in the center of the screen minus the katamari. However, in Katamari Forever, the katamari is shown on Jungle's body, but not only that, he no longer blends in with the pause menu.

Jungle has a camouflaged design body and green pants.

Jungle has changed drastically, he now is transparent and has rainbow pants.

Jungle No longer fully blends in with the screen, his body only showcases one permanent background.

Where/How to Find: Make a Star 3 - Walking up the ramp past the dog house. Very small, has a red arrow pointing at him (comes around at 5-6 minute mark).

Description: He loves playing hide-and-seek, but he hides in the same place every time.

When Rolled Up: "Eek, it's Jungle! Why are you in camouflage? Are you fighting someone? How disturbing."

Where/How to Find: Baby (Limited to 50) - On the coelacanth in the pond in the jungle area.

Description: A cousin good at blending in with surroundings. He's worried about how people always leave him behind during trips.

When Rolled Up: "Oh!! You just rolled up some weird liking thing!! Wait... It’s cousin Jungle. Oh, stop getting in the way!"

Stage Conclusion: "Oh, it's cousin Jungle. What were you doing on Earth? Hmm? You were riding a coelacanth? We have no idea what you're talking about."

Where/How to Find: Gorilla - He's walking around the trees. It's a little bit difficult to find since Jungle can blend in every surroundings.

Description: Good at blending in with his surroundings. He's tired of people bumping into him all the time.

When Rolled Up: Hmm...? A funny blendy thing... It's cousin Jungle! Engaging in rollworks?

Where/How to Find: Chatéau Notre Desir - Near a guy who is spinning around a tree.

Description: A cousin good at blending in with surroundings. He's worried about how people always leave him behind during trips.

Cousin Leaderboard Description: A cousin who's an expert at camouflaging himself. He's tired of people bumping him into him.

When Rolled Up: "Hm? Something obscure... It's Jungle! Why aren't you at makeover class?"

Stage Conclusion: "A hint of concealment... Jungle, of course! Go scout out some pixie hives over in the Princedom."

Where/How to Find: Limited to 50. He's found riding on the back of a large fish (Coelacanth) in the jungle area's pond.

Description: A cousin good at blending in with surroundings. He's bothered how people always leave him behind during trips.

Jungle peaking from a door.

Jungle in the snow. 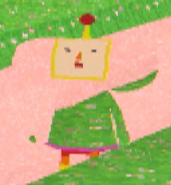 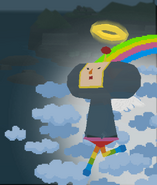 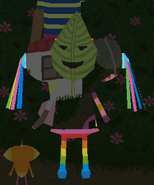 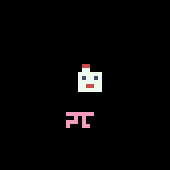 Jungle blending in with his surroundings! 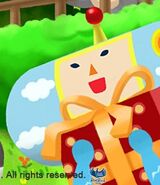 Jungle with a present