Katamari Damacy Online ~Roll it! Prince!~ (괴혼 온라인 ~굴려라! 왕자님!~, goehon onlain ~gullyeola! wangjanim !~, lit. “Core Soul Online”) was a Korean game and the first game developed by Blue Bird Studio; a division of Windysoft (now known as JUNEiNTER). Katamari Damacy Online was opened for beta testing late 2007 and ran for around 4-5 years, shutting down on February 24, 2012. The game started with many beta tests before being officially released. Not a lot of information was recorded during it's lifespan, but there exists still news articles and recordings of gameplay.

Katamari Damacy Online had multiple maps, including stages from previous games (such as the CowBear level from We Love Katamari). Multiplayer maps were also reused from the Playstation 2 and Playstation Portable Katamari games. There were supposedly also minigames for the players available.

The introduction movie to Katamari Damacy Online plays out as followed;

The King, Queen, and Prince are out in the cosmos, on a fishing trip. The three of them are sat on a planet as they cast their lines. The king manages to accidentally hook a large bath plug with his fishing rod, pulling it out of the hole. This causes a black hole to form and begin pulling in the surrounding objects.

The King and Queen pause to stare at each other for a brief moment before flying off, leaving The Prince alone to sort it out. The scene closes out onto The Prince's face, showing him looking irate in a comical moment.

This story shows some similarity with that in Beautiful Katamari.

New features were added to Katamari Damacy online - most notably, a 'house' system was added to the game, which allowed users to create their own islands within the game and add to them using items which they have collected using their Katamaris (not unlike Me & My Katamari). There have also been mentions of in-game virtual pets. The female players had an icon of Princess by their usernames and the male players had an icon of The Prince by their name.

Katamari Damacy Online introduced a new method of collecting cousins - Cousins could be bought with coins that could be collected from playing or through external real currency purchases. It seems that different cousins were available at different times within the shops. Unfortunately, these cards were just temporary to the player.

Charging/Dashing would require a meter to be filled.

Multiplayer mode also worked quite differently. There were 2 main

modes: Rolling Battle and Crash Battle. Rolling Battle entailed two players being put on a stage, and tasked with getting bigger or getting more of something than the other. Crash Battle was the same, but the players play on a battle stage from the original Katamari Damacy. Both of these could be played normally or in teams. There were also power-ups to shake up gameplay. These were:

Shark Missile - Knocks objects off of another player's katamari.

Octopus - An octopus covers the other player's katamari, making it move slower.

Rock - Turns another player's katamari into a rock, briefly rendering them unable to move.

Spider - Sprays webs all over another player's katamari, presumably lowering their speed.

Hook - Takes an object off of another player's katamari.

King Card: Surrounds the katamari with cards with the king's face on it. Probably acts as a shield.

Siren: Hovers over the players katamari making a blaring noise for a short time. Its effect is unknown.

mari, but once in the lobby, the player has the option to choose another katamari from a shop-like building where they are probably able to unlock different katamaris for their choosing. This building can be easily spotted with katamaris that surround it.

As far as what we know about development for the game, the game was developed by a company named Cyberstep. CyberStep is a developer and publisher of online video games. Headquartered in Japan, CyberStep has local branches in the United States, Taiwan, Korea, the Netherlands and Indonesia. The company was founded on April 1, 2000. CyberStep has developed seven online games: notably the third-person shooter Cosmic Break in 2008, the action MMORPG Onigiri in 2013, and Dawn of the Breakers in 2018. The game was then produced by a company named Windysoft, there is virtually no given information about this company anywhere online, all that we know is that it's a private company based in South Korea and that Windysoft is a developer of Korean free-to-play games. There was another company involved called “South Rabbit BlueBird Studios” seen on some promotional art and other official content from the game, there is virtually nothing known about this company when searched for online other than that it was Windysoft's development department. This was their first (and presumably only) work, explaining why looking it up doesn't return many results.

Katamari Damacy Online had testing periods known as CBTs. During these tests, 99.7% of the players said they were willing to play the game. A large majority of those players were not familiar with the Katamari series, surprisingly. Hollys Coffee, a popular Korean coffee chain, held events as well. Over eighty percent of these participants were females, proving the appeal once again. One of these trials were conducted amongst a group of college girls who gave a positive response, especially to the cute cousin designs. These reactions led to the game appealing to a feminine audience, which is shown by their collaboration with the Korean make up brand Etude House. An odd addition to this is that the game apparently had a Couples System. Not much is known about this feature, but some resurfaced events have shown a theme of playing with your friend of the opposite sex. Some of the couple features consist of: The couple's bulletin board, the couple's shop, and the couples ranking. It is rather odd knowing that the players engaged in romance whilst playing as cousins.

At least 30 cousins were introduced with Katamari Damacy Online (names that we know of are provided below in the original Korean language next to the literal translation of their names as they are sounded out.) - these characters were never introduced to games outside of Windysoft's Katamari Damacy Online and are thus exclusive to the game. Promotional art for the game includes many of these cousins.

Cousins introduced to this game consisted of both NPC's that held shops and warps, and playable cousins.

The soundtrack that can be heard from the game are sung in a mixture of both Korean and English, a number of the official tracks from the game are composed by Lee Jae Jin for the album "이재진 그리고 Takeone" which was released in 2016 and the genre for this soundtrack is "K-Pop". There are a total of 14 songs on this album, some are songs that are featured in Katamari Damacy Online, the rest of the songs are from other games that the artist had recorded for. The remainder of the songs used in the game are reused from past games, notably Katamari Nah-Nah, Houston and PROLOGUE.

A famous Korean celebrity known as Noh Hong-Cheol helped promote Katamari Damacy Online through videos, commercials, events, and more. It is stated he lost a large percentage of money with this. He did voice acting for the sound effects in the game. Game events such as 'Save Noh Hong-Cheol!' featured him as a theme for the events. Noh Hong-Cheol can be seen in many photos posing with The King of All Cosmos. In a promotional video, he is shown signing his name on plush wrist wrests that were in the shape of The Prince's head.

Down below are some of the wallpapers and promotions made for Katamari Damacy Online.

The Prince and Princess.

King and Queen do a puzzle.

The Queen uses Odeko as a pen.

The cousins at a theme-park.

Dongdong-Yi painting his face on.

The prince is upset.

A wallpaper advertising power-ups and obstacles.

The King and The Queen in hanboks.

The Queen waters her bountiful harvest of babies.

The king and queen enjoying each other's presence

Promotional art showing the cousins gathering for a photo! Cheese!

The lobby where players would shop, select a stage or just hang out

Ruz being a fashionable queen.

Hart giving herself a makeover.

Yoring taking a bath in soup.

The Prince being a talented little boy.

Cheda running from a rat 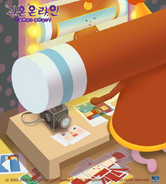 Poor Havana can't get a good photo of himself.

The Prince with a key, looking at the cake stage's map.

The Prince and his cousins at a festival.

The Prince in a red scarf. 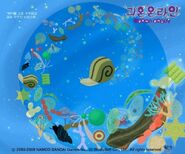 Wink getting ready to capture a bird.

Burda singing on top of a piano.

Tiger having a picnic with animals.

Reis wrapping a ribbon around a teddy bear's neck.

A snowball with cousins stuck in it.

Candi making dalgona with some cousins and The Queen.

Art for the Etude House promotion.

A view of the lobby