The Katamari series is a video game series produced by Bandai Namco. It consists of 6 main games and a few spin-offs.

All games in the main series consist of The King of All Cosmos sending his son, the Prince, to Earth to roll a magical ball known as a Katamari around, picking up items and people to create material for a star. Once enough objects have been collected, the goal is beaten and the player is rewarded with the star or planet created by that Katamari. The series is almost universally praised for its unique gameplay and quirky story telling.

Introduced the concept of the Katamari, the King, and the Prince. The Queen is seen as a background character. While many of the games in the series refined the ideas introduced in Katamari Damacy, many consider it the most innovative.

Added a greater variety of Cousins and levels, and introduced rolling different objects other than a Katamari, (i.e. a snowball, a sumo wrestler). And also the the first game where the cousins are playable characters in 1 player mode. We ♥ Katamari remains as a fan favorite among Katamari fans for its cutscenes, smooth mechanics, and soundtrack.

The first game in the series to be released on the PSP and to not have any involvement from Keita Takahashi, the original inventor of the concept of Katamari Damacy.

The first game to not be released by Sony. After some technical issues with the PS3, Beautiful Katamari was instead ported to the Xbox 360, ending the effective PlayStation exclusive status of the series.

Released for the PS3 in 2009, this title includes versions of the classic levels and series of new levels hosted by a new character, the RoboKing.

The first game to be released on the PlayStation Vita. Also the latest entry in the series.

Spin-offs of the series include non-console video games and games featuring Katamari characters but are not Katamari games themselves.

A free game with level packs available. Leaderboard services and the downloadable levels for Katamari Amore were terminated as of March 30th, 2015.

An idle game where the player taps the screen to roll a katamari; every once in a while an object will appear for the katamari to roll up.

An endless runner, similar to Tap My Katamari but in 3D, able to grow large and buy upgrades for cousins and rockets.

Rolling With Katamari was an official, early mobile katamari game from Namco Network. It has the style of a 2D retro game.

Effectively a port of the original game to the P409i cell phone, which uses the motion sensitive controls of the phone to move the Katamari. There is also a traditional control scheme that uses the phone's buttons instead.

This game was an Android-exclusive app that allowed up to 30 cousins to float around your screen. The size of the cousins could be changed, and up to 6 different backgrounds could be applied.

Effectively an 8-Bit version of the game, a random cousin (one of 48, from Katamari Damacy to Me & My Katamari) is selected. The game is played by moving the King around a field to guide the cousin into rolling up items. Multiple cousins may also be played as at one time.

A HTML game where you click on The Prince to shoot into brick blocks. This game featured three stages. 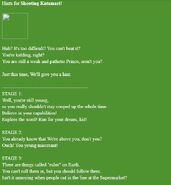 There was a minigame on the American We Love Katamari website where the objective is to roll up fans with a katamari while playing as The Prince. However, you must do this under a time limit.

A card game that uses the Cousins and Royal Family. Beating the game rewards the player with a deck of Beautiful Katamari playing cards, which are then printed and cut out from card stock. The King, Queen, and Prince are won when only one of their cards is found, while the cousins must all have matching pairs found before they are added to the player's found list. There is a glitch where the last clicked cousin will show up in the Characters page even if both cards haven't been found together.

This is a section where it relates to Katamari playable demos that were produced by Namco for early access.

First known public early access of We ♥ Katamari released in 2004.

This is a section where it relates to Katamari, but was not officially released by Namco or published by Namco.

An endless runner (similar to Amazing Katamari Damacy) created by Char Room only available in Japan. This game was released during a campaign where game developers were allowed to use some of Namco's IPs to create games.

A Korea-exclusive Katamari based MMO developed by Windysoft. The game has since been shut down and little information is known regarding it, aside from some screenshots, videos, and articles.

A Mario Kart styled game that includes elements from Katamari Damacy and it includes characters such as The King, and The Prince. Includes a map called "King's Kourse" available by unlocking the "Classic Cup".

Another Mario Kart styled game, this time on mobile platforms, most likely a sequel to Pac-Man World Rally, and includes The Prince and Ichigo as playable characters.

A Frogger styled game where a character is placed to cross various streets and riverways and try not to get smashed by oncoming traffic. The game features The Prince, The King, The Queen, Princess, and Katamari Chicken (A chicken dressed like The Prince) as playable characters. The Prince and Princess can roll up objects in their katamaris. The King shoots out rainbows and The Queen leaves behind a trail of cookies.

Galaga Wars is an app based on the Namco arcade game, Galaga. The Prince of All Cosmos can be bought and used as a ship in the game. This was most likely added to advertise Amazing Katamari Damacy.

katamari.namco.com was the official US Katamari website. You could send in fan art and The King himself would critique it if it won the art contest. Other features on this website include being able to download a desktop buddy of The Prince, receive presents for the Desktop Buddy, get news, view fan art, look at gameplay, and read the story for Katamari.

The website has since shut down, but you can look at it via Wayback Machine.

An installation feature that allowed people to download a Katamari character and it acted as an interactive desktop buddy to connect to the Katamari Website faster as well as sharing an email with friends so they can download the buddy.

katamariforever.com was the official website for Katamari Forever. Barely anything is known about the site, and not many screenshots of it were ever captured, nor was it archived, but it's assumed that it was similar to katamari.namco.com. Screenshots of an earlier version have been found, along with the later website.

The Japanese index is still up here.

katamaridamacy.jp, officially called Katamari On The Web (not to be confused with the fansite) is the official Japanese Katamari website, and the only Katamari site still online and still being updated.

It hosts various indexes for the earlier and later Katamari games, descriptions for The Prince and Cousins, comics, and the flash game 8-Bit Katamari Damacy. It also has a developer blog done by Dr. Katamari 2.