Katamari Wiki
Register
Don't have an account?
Sign In
Advertisement
in: Katamari Games, Game, Me & My Katamari, Main Series Games

Me & My Katamari (僕の私の塊魂, Boku no Watashi no Katamari Damashii) is a video game for the PlayStation Portable system. It is the third game in the Katamari Damacy series and is notable for being the first game developed without the input of series creator Keita Takahashi.

The King of All Cosmos and the Royal Family decide to take some time off from their celestial construction and travel to Earth for a well-earned (for the Prince at least) tropical summer vacation on their own sunny island. Unfortunately, the King's over-exuberance creates a Tornado that strikes and devastates nearby Paradise Commonwealth Island. One of the residents, a turtle washes ashore next to the Royal Family and tells them his tale. The King then decides to make new islands for the animals of the Commonwealth with several katamari. Similar to the previous "Katamari" titles, the King sends the Prince to the Sunflower Continent, which is full of the paraphernalia used to create new landmasses.

Gameplay is much like that of the previous Katamari titles. Controls differ from those of the PS2 games given that the PSP lacks the DualShock 2 dual analog sticks. The player uses the D-pad and the four face buttons to imitate the analog controls. Often forgotten, as the creators added this only for the North American release, is the ability to use the thumb-nub instead of the D-pad (the previous Japanese version only uses the thumb-nub to move the camera). The L and R buttons are used for tight turns. When a new island is made to replace an old one, The Queen runs over it, replacing the old with a new one.

The main hub for this game is the Prince Island.

The Sunflower Continent is the main level in the game. For variety, the time of day and season constantly change during different missions. There are five stages of the game, rising up to the World where the katamari can reach over 4000m.

Each player has his or her own island, which they name. A maximum of three of the player's friends can visit the island, via ad hoc network. The visitor can challenge the player in a contest of rolling the most valuables, like the Saving Red Panda stage in "We ♥ Katamari". 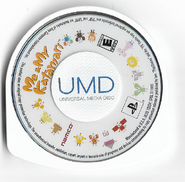 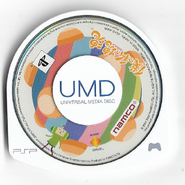 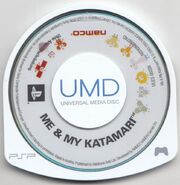