Pac-Man World Rally, known in Europe as Pac-Man Rally, is a kart racing game in the Pac-Man series. It is developed by Bandai Namco Games, and released in August 2006 for the PlayStation 2, Nintendo GameCube, PlayStation Portable, and Microsoft Windows. An Xbox version of the game was cancelled, though a preview of the game can be found in the Xbox release of Pac-Man World 3. A follow-up racing game, Pac-Man Kart Rally, was released for iOS in 2010 and Android in 2012.

Pac-Man World Rally features similar gameplay to other kart racing games such as Mario Kart. Up to four players can compete in standard racing across fifteen race tracks. During races, players can use power-ups to attack opponents or gain a boost of speed. By driving over a fruit button, that fruit will appear on the race track; players who collect a fruit will gain access to specific shortcuts on the track, giving them the opportunity to overtake their opponents. Players can also collect pac-dots scattered along the track to fill their Pac-Meter. When it is full, the player can activate a temporary transformation into the Pac-Mobile, a vehicle that gives them a boost of speed and allows them to eat and temporarily incapacitate other racers. The game also features a battle mode with four different arenas for competition. Players can choose from fourteen different playable characters from the Pac-Man franchise and other Bandai Namco titles. The PSP version features two exclusive characters, Mappy and Mr. Driller, along with an additional race track based on Dig Dug.

What makes this game unique are the Pac-Man mechanics applied in the game. The player can collect Pac-Dots (the yellow button needs to be triggered first) to fill up their Pac-Meter; if it's full, the player will turn into a Pac-Mobile, and can eat their opponents for a limited amount of time (much like the Power Pellet's effect in the original Pac-Man). The player can also collect fruits (the corresponding fruit button needs to be triggered first) in order to access shortcuts, making the race easier.

As with most kart racers, many power-ups appear within the game, which are gained by running into Pac-Boxes. Most of them are blatant copies of Mario Kart power-ups. They include:

There are also several unlockable power-ups, which include:

In GP mode, you race in a Cup which consists of 3-4 tracks each. Depending on the position you gained after each race, you'll get points. The racer with the highest points wins the gold Cup.

Each character has a different race car with different stats: speed, acceleration, and steering.

** = Is exclusive to the PlayStation Portable (PSP) version.

In Battle Mode, instead of using the ordinary power-ups, the player uses weapon-like items based on the fruits from the original Pac-Man (i.e. a strawberry rocket, a cherry bomb, etc.), which have limited amount of ammo and various damaging powers. The objective in the Battle Mode varies depending on the game mode the player chooses:

** Is exclusive to the PlayStation Portable (PSP) version.

A mode exclusive to the PSP version. There, the player can select from one of three modes:

All versions came out on the same day. While the PSP version has much more content than the others, it is debatable whether it is the superior port, as less opponents appear in each race. 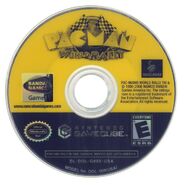 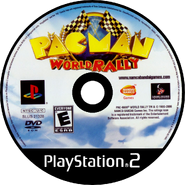 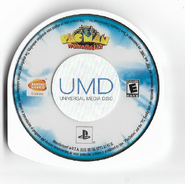