This article is a stub. You can help Katamari Wiki by expanding it. 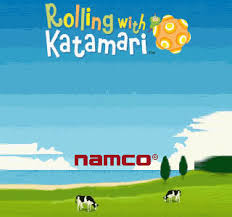 Rolling With Katamari was an official, early mobile Katamari game from Namco Network. It has the style of a 2D retro game.

The game featured 30 stages with presents to collect and multiple achievements to earn.

The King of All Cosmos has accidentally knocked all the stars out of the sky during a crazy night out. It's up to the pint-sized Prince to put the twinkle back in the heavens. You help him create clusters of eclectic earthly objects fantastic enough to launch into space to replace the stars! Cockroaches, crabs and cars beware! Collect everything from hamburgers to the Eiffel Tower!

Retrieved from "https://katamari.fandom.com/wiki/Rolling_with_Katamari?oldid=13051"
Community content is available under CC-BY-SA unless otherwise noted.