The main currency that is used in the Sunflower Continent is the Yen, we know this as we roll around products in the Supermarket in Beautiful Katamari, there are prices for things flinging for ¥50. Another way we know that the continent uses Yen is that during the Money and Shopping levels for Katamari Forever, the more expensive or more we use our budget, the currency is shown in Yen, however for We ♥ Katamari (North American release), the Money stage uses United States currency instead of displaying Yen, possibly hinting that the continent also uses American currency.

Another way we can tell that the Sunflower Continent uses Yen is that we are to roll up coins and bills in different levels. More importantly, the dollar bills found in the game are fictional as they’re ¥1,000 bills, but they’re stylized in American Dollars and it claims to be “The Katamari Game Money” as it’s written on the back of the bill. There are even 1 Yen coins, 5 Yen coins, 10 Yen coins, 50 Yen coins, 100 Yen coins, 500 Yen coins, silver coins, gold coins, old coins, big coins, diamonds, and 1.000g gold bars as other forms of money.

Almost nothing is truly know about the Sunflower Continent’s form of government, all we know is that there are Governors who are very rich and important men who reigns over hotels and amusement parks, as stated by their descriptions respectively.

School is an important factor for the Sunflower Continent, and it appears that a whole great number of them exists in the whole continent. In Katamari Damacy, the main school that we usually see is the Komon Junior High School, this is the most seen school in Katamari Damacy, there are other schools like an elementary school, high school, and college.

In We ♥ Katamari, the main school we see in this game is the Kushima City Hiyodori Academy, where we there’s a mixture of elemtary, middle school, and high school students, all within the same building. The school has a courtyard where students play sports or do physical activities, a pool area, a gymnasium, and a second main building.

In Beautiful Katamari, we see that the school is a High School, it’s like the Kushima City Hiyodori Academy where there’s a main building, gym, and courtyard, but it lacks a pool and second building and it’s right next to a river and train tracks.

The weather for the Sunflower Continent can vary dramatically, it has shown to be quite random and quite unpredictable, most of the time, the weather for the continent is sunny, or partly cloudy. As seen in the Clouds stage for We ♥ Katamari, we see how the area can get very cloudy and stormy, the continent shows to have heavy rainfall with rain fronts scattered everywhere.

The Sunflower Continent lies on the Tropic of Cancer, which can explain it's hot temperatures every now and then.

There are many different types of vehicles that can be seen going about in the Sunflower Continent. The many types of vehicles include cars like compact cars, vans, limos, monster trucks, taxis, bikes, scooters, buses, race cars, cable cars and roller coasters. The continent also has many highways and roads that go around and connect to different islands.

There are even boats that be rolled as well such as canoes, sail boats, rafts, pirate ships, cruise ships, oil tankers, and yachts. The oceans around the continent is littered with nautical vehicles.

Trains are also an important means of transport for the Sunflower Continent, in the games, you can be able to see a set of train tracks that are always in use. Different trams, locomotives, and trains are able to use these tracks.

There are also aircrafts that are seen Flying in the air or around the katamari in game, these types of air vehicles include hot air balloons, helicopters, airplanes, and even UFOs.

The different land animals that be spotted includes gorillas, camels, cows, sheep, mice, deer, kangaroo, giraffes, and all types of insects like spiders and butterflies. The animals in the Sunflower Continent don’t behave like other animals found else in the world, for example there is a zoo called “The Mother Nature Memorial Zoo”, in this zoo, the animals are able to roam freely and there little to no barriers that contain the animals and allows for people to actually interact with the animals whether it be a calm sheep or ferocious tiger. The most notable land animal that is famous in the Sunflower Continent is the Red Panda, it’s not an ordinary red panda, it’s a actual panda bear where instead of it being black and white, it is red and white, they're are an endangered species and that’s the whole goal for the Money stage in We ♥ Katamari, it’s said that they get their red color from eating red fruits like cherries and strawberries.

There is also the number of avian animals that take flight all around the continent, the continent seems to be plenty if flamingos, sparrows, eagles and even plenty in the mythical Phoenix.

Aside from normal animals that can be found all over the world, the Sunflower Continent is known for the amount of mythical creatures that be spotted all over. As said before the Phoenix is a prominent example of this as well as the fact that dragons, Pegasus, centaurs, and fairies all in habit the continent as well. The continent is also home to two very strange creatures, the Holy Cow and the Cowbear, two extremely unusual animals that reside within the continent.

Geographically, the Sunflower Continent usually houses a gigantic volcano, an icy glaciered area, a futuristic floating landmass, a particularly rainy area and a mushroom city, with islands, mushrooms, or tornados that surrounds the central land that you normally start off. There are islands, mushrooms, or tornados that border the outer part of the continent and acts as a barrier from going to far into the world. The scenery across all the games seem to change over time, but they all relatively show the same kind of scenery no matter which game. After passing the 3k mark and being able to see the Sunflower Continent at a greater height, the entirety of the continent is a archipelago of scattered islands in the Pacific Ocean.

Generally, the central part of the Sunflower Continent or the main area you start off, changes from game to game, but every version of this central part of the Sunflower Continent always seems to include, small residential towns, a mountain range, a part of East Asia with the Great Wall of China, a New York Area with Staten Island and Statue of Liberty, a part of the Western Coast of the United States with Hollywood sign, an airport, a huge desert, and a Jurassic zone.

Outside of this central area, the areas often include a Space Shuttle Island, Pink Flowery Island, a Fake Mountain Island with space shuttle inside, a glaciered polar region, a volcanic region with giant active volcano, a Flatland Island with burial mound, a floating futuristic landmass, a Skyscraper Island with giant skyscraper, a cluster of Mushroom Islands, a Rainy Island or Area, An Autumn Island, a giant cluster of clouds, and a Oni Island. 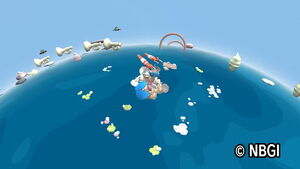 Once a Katamari has become large enough, more of the continent can be explored, including other cities and countries. Oddly, countries resembling China, Japan, Korea, France, and the US are all on the same continent. The central volcanic mountain of the continent is even called Mt. Fuji. Outlaying islands include Ayers Rock and Easter Island. Other islands exist further out to sea, but the Sunflower Continent appears to be the only major land mass in stages that involve it.

The types of locations you can find are as follows:

Most games in the series begin inside the Hoshino's house or apartment. Here, the goal for the Katamari is generally small, but can also lead out into the city where the Katamari can get much bigger. Despite the Katamari being present, the family oddly tends not to notice it until it's become large enough to roll them up.

After the house stage, the next location is the town. While normally this starts out as just a fairly small neighborhood, it opens up into the larger part of the city, where more people, animals and things can be rolled up.

After the town comes, you are able to roll around in the city. You are able to roll up more and more people, it's a sensible area with cars, trees and small houses to roll up. Depending on the game (and level of the game, for that matter) the city can be inland or on the coast. The city is almost completely collectible, with cars, buildings, and even land formations being rollable.

These are the names of the locations that appear throughout all of the games:

Skyscraper Island in We ♥ Katamari

Skyscraper Island in Me & My Katamari

The Polar Region in Katamari Damacy

The Polar Region in We ♥ Katamari

The Polar Region in Me & My Katamari

The Polar Region in Beautiful Katamari

Space Shuttle Island in We ♥ Katamari

The Rainy Area in Katamari Damacy

The Rainy Area in We ♥ Katamari

The Rainy Area in Beautiful Katamari

Volcano Island in We ♥ Katamari

Volcano Island in Me & My Katamari

Pink Flowery Island in We ♥ Katamari

Pink Flowery Island in Me & My Katamari

Future Island in We ♥ Katamari

Future Island in Me & My Katamari

Burial Mound Island in We ♥ Katamari

Autumn Island in We ♥ Katamari

The Fake Mountain in We ♥ Katamari

The Cloud Cluster in Beautiful Katamari

Mushroom Island in Beautiful Katamari
Add a photo to this gallery
Retrieved from "https://katamari.fandom.com/wiki/Sunflower_Continent?oldid=15922"
Community content is available under CC-BY-SA unless otherwise noted.