Tap My Katamari is a clicker game for phones developed by Bandai Namco. As of now from April 26, 2017, support for the game has been cut off, leaving the servers down and it being unable to be re-downloaded on any of the app stores.

As a clicker game, Tap My Katamari is very simple in its controls, only really needing to be able to tap the screen in order to progress. Each tap manually moves the katamari forward on a set path until reaching an object, which upon being rolled up, gives coins to the player.

The player controls The Prince, which serves to manually chip away at distances through tapping. He can be upgraded through spending coins, which lets him cover more distance with each tap. Reaching certain levels also unlocks the use of abilities, which have to be bought with coins in order to be used. Each ability has its own cooldown timer, which varies in length depending on the power of the ability.

Cousins are considered separate from the Prince, as they consistently roll the katamari forward and collect currency, even when not playing the game. They ride on clouds underneath the Prince, dancing and cheering him on. Each Cousin can be leveled up individually to boost their rolling power, and certain milestones in their levels give the player randomized perks, known as their Mojo. Upon reaching level 1000, they can also be 'loved' for a large amount of coins, which drastically boosts their contributions toward distance. When making a star, the Cousins' levels will be reset and their Mojo will be randomized.

Special Cousins can also be purchased with candy, the game's more limited currency. Obtaining and upgrading them offers permanent multipliers to both the Prince and the Cousins' distance covered. They also possess perks associated with milestones to their levels, generally being of higher quality thanks to needing to spend candies to level them up rather than coins. They ride on golden clouds, and, unlike the standard Cousins, don't go away through star creation. The cousins represented this way include Drooby, Huey, Mu, Signolo, Sherman, Hans, and Nai-Nai.

The game has an infinite amount of levels, with each level having ten sections to it. Rolling up one object will take the player to the next section, and at the tenth section, a timer challenge is activated, in which a certain distance must be covered in thirty seconds or less. If achieved, the player moves on to the next level (as well as being briefly congratulated by RoboKing, Papa, and the Queen), but if failed, will be taken to the previous section in an infinite loop until the timer challenge is activated again through a button. The challenge can be repeated an infinite amount of times.

Star creation can be accessed once the Prince reaches a high enough level. Star Tokens will be awarded to the player depending on the Prince's and Cousins' levels, as well as the last stage reached in that given run. However, this will bring the player back to the first stage, with all temporary upgrades revoked. Star Tokens can either be spent on presents, which offer technically permanent upgrades depending on the ones obtained, or can be put toward larger payments for constellations in the Cosmos, offering immensely powerful boosts toward gameplay.

Different mushrooms can be purchased for varying amounts of candy. Their effects generally scale in power depending on how much candy it takes to buy them, with cheaper ones being a temporary autoclicker while the more expensive ones offer certain multipliers for a given number of hours or even immediate Star Tokens.

The King shows up on occasion, where upon being tapped, will give either a large amount of coins or a small amount of candy. If the setting is enabled, he can also offer larger quantities of each reward or a free use of a powerup by watching an ad, although this functionality is no longer supported.

As seen within the trailer, The King of All Cosmos is singing while taking a shower, he begins to sing too loud and this causes all the stars in the sky to shatter. The King admits to shattering all the stars and sends The Prince, who visibly isn't too happy about this situation, to go rebuild them.

Experience a new way to play Katamari! Tap My Katamari is a spin-off clicker game in the strange and quirky universe of sticky balls, tiny green royalty, and idle cowbears.

You are the Prince, tasked by The King of All Cosmos to restore the universe and its stars by tapping. To do so, you've been given the Katamari, a magical ball that makes everything it touches stick to it. Grow your Katamari into a star and restore the universe!

Start in the house picking up small things like thumbtacks and hamsters. Increment and get BIGGER then start picking up cows and cars! Idle and get EVEN BIGGER then amass giant squids and spaceships!

If you enjoy the Katamari universe, try this new incremental game and discover a new way to play Katamari on your phone!

How big will you make YOUR Katamari?

The Special Cousins, as they appear when all are purchased. 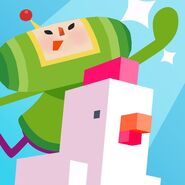 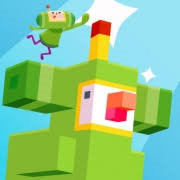 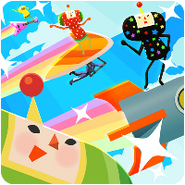 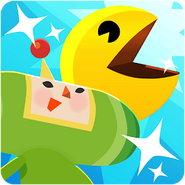 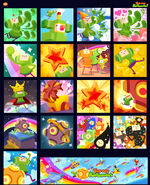 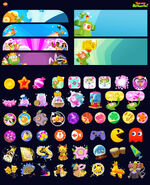 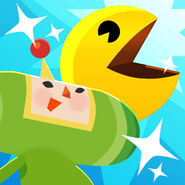 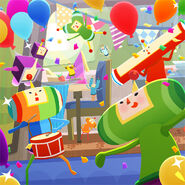 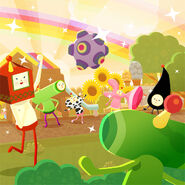 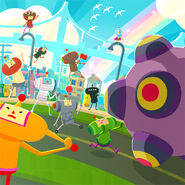 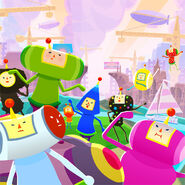 All of Touch My Katamari's assets