Katamari Wiki
Register
Don't have an account?
Sign In
Advertisement
in: Royal Family, Characters, We ♥ Katamari: Characters,
and 14 more

The Prince (also known as the Dashing Prince, or the Prince of All Cosmos) is the main character and silent protagonist of the Katamari Series and usually the first playable character. He is the son of the The King of All Cosmos and The Queen of All Cosmos, and the grandson of Papa.

Throughout the course of the games, the Prince is entrusted with the task of rolling a Katamari (or something similar), for the sake of filling requests or creating celestial bodies. In Katamari Damacy, the Prince was tasked with using Katamaris to create stars for the King after a drunken night of cosmic destruction. When the King realized what he had done, he unceremoniously sent the Prince to Earth, sent him a Katamari and told him which stars to make. Despite being constantly told what to do, the Prince puts his all into everything he does, and always does his best.

In We Love Katamari, it is possible to roll up the Prince in the Make a Planet 1 stage if the player chooses to play as any cousin besides him, The Prince is inside an apple on top of a dresser. The Prince can also be found on a printer in the Sumo level. And as seen in the final part of As Large as Possible 5, the player can find the prince riding a dragon

In Me & My Katamari, it is also possible to roll up the Prince in the tutorial stage. By using June, the Prince is instead the final object to be rolled up to clear the stage.

In Beautiful Katamari, rolling up Marcy completes the tutorial stage, repeating the tutorial as Marcy allows you to roll up the Prince. You can also find The Prince in Dangerous Colony Standing by the giant skyscraper.

In Touch My Katamari, The Prince can not be rolled at all in this game.

Color: Lime body and purple legs with light, medium, then dark green stripes on the ends of his head.

Description: The Prince is growing stronger and more mature every day. Still very small though.

Having arrived on Earth after the King of all Cosmos destroys all the stars in the sky (including the Moon), the Prince begins his not-so-royal task of rolling Katamaris to collect items to make new stars. Once he has completed the Katamari, the King sends it into space to be turned into a star.

During this time, the Prince attempts to hide his work from the people of Earth, but was quickly noticed by the Hoshino family. Once he finished making the stars and constellations, the Prince creates a new Moon, which involved the accidental roll-up of the Hoshinos.

Once his task to restore all the stars in the cosmos was complete, the Prince realizes that his father, The King of all Cosmos has become very popular on Earth. His work (the game Katamari Damacy itself) caused a lot of positive feedback from many inhabitants of Earth, and soon, the King of All Cosmos started receiving various requests from his new fans. Initially, the King doesn’t have a clue regarding his sudden popularity (his first guess was his chin), so he sent the Prince to fulfill as many requests as he could. In the end, he stumbled upon a dog, who wondered if the Sun could be rolled, so the Prince completed the request, filling the King with joy. Even though the King recognized that there were still more fans out there with requests to fill, he was satisfied with all the good work the Prince had accomplished.

Closely following the previous game, after completing a lot of requests from their fans, the Royal Family takes a vacation to the tropics. Once again overindulging, the King of all Cosmos decides to show off his cannonball and

causes a tsunami, destroying all the nearby islands. The local animals were thus left out of a home. Therefore, the King of all Cosmos decides to build new islands for them. Once again sending the Prince to roll things up with a Katamari, the King takes requests for new islands from the animals. Once all the islands are finished, the King decides to do something much calmer for his vacation.

The King the Prince and the Queen were all enjoying a picnic until the King decided to go fishing in space and ended up pulling out the plug on a black hole. The black hole then sucks in all of the stars and planets, though earth remained. The King then tasks the Prince and his cousins with restoring the night sky once more. Not much else is known about the plot of Katamari Damacy Online but it is notably similar to the plot of Beautiful Katamari. The Prince was a Normal cousin in Katamari Damacy Online and is notable for being the only playable character in the game whos card didn't expire due to him being the default character.

One day, the King was training the Prince to perform large hops (foreshadowing the Prince Hop ability), but the King decides to show off, demonstrating his "Giga Jump", when suddenly an odd meteor that is flying by strikes the King in the head so hard, he loses his memory. With the King in a comatose state, the Prince panics and calls a council with his cousins, where they decide to create a temporary substitution for the King: The RoboKing. But once all the pieces were in the right place and the Prince inserts a Reactor Core made out of a Katamari, the Roboking malfunctions, blasting off into the Cosmos, and destroying all the planets the Prince made in Beautiful Katamari. After the malfunction, the RoboKing gains control and crashes back down to Earth. It then became the Prince's job to recreate the planets with the RoboKing's help, and restore the King's lost memories. Once the King‘s memory returns, the RoboKing realizes he was useless and set off on another rampage. The Prince was forced to dismantle the RoboKing by means of Katamari, piece by piece before the King sent it into the Cosmos. The King asks the Prince to go inside his mind and roll up his excess dreams into a Katamari, ending the game once the credits roll.

This time, the King suffers a life crisis after he hears a child say the King and his school principal are equally awesome. Filled with depression and low self-esteem, the King asks the Prince to fill requests from fans again to restore him to his former glory. During this adventure, a young adult named Goro, fan of video games and the internet, saw what the King had become, and, realizing that The King was "turning into him", decides to change his life. As the game is completed, we see Goro attempting to buy a study guide from a library, when he is attracted to buy manga instead. When he was about to use his money to buy them, he is suddenly rolled up into a Katamari by the Prince, prompting memories of his mother, increasing his motivation and self-control. He freed himself from the Katamari, rushed into the library, successfully purchased the study guide, and even caused a girl to fall in love with him, because "learning is so sexy". We then see a montage of his life after these events; passing exams, getting hired, marrying the girl, and even having a son. Standing on a cliff, he reflects on his achievements, and concludes that, "Katamari is really awesome".

The Prince cannot be rolled in any of the main stages of the game, but he is able to be rolled up if you to play versus mode and the opposing player happens to choose The Prince. The size for the Katamari looks roughly 10cm, so it's ideal to roll as much as possible to roll up The Prince.

When Rolled Up: "Oh!! You just rolled up some weird green thing!! Wait... are you done rolling, Prince? We suppose it’s all right with (cousin) around."

Where/How to Find: Mouse (Tutorial) - Play as June in order to get him.

When Rolled Up: "All righty! All done! All clear now, yes? Then Back we go to Prince Island! Hyper Rainbow!".

Cousin Leaderboard Description: "Our beloved son, the Prince! He always tries his best, which is why he's so popular!".

When Rolled Up: "Nothing like a Prince roll to finish this party! The Katamari is looking plump too. Very lunar. All righty, back to the Princedom now. Royal Rainbow!".

Cannot be rolled up in this game, but is the main character and you have the option to roll as him and complete tasks given by The King.

Only playable character in the game, he's sent to Earth to collect things to help his father regain memory after getting hit in the head by a comet.

Only playable character in the game just like I Love Katamari, he goes to Earth in different areas and different time periods so his father, The King can learn about the different places the Prince visited.

Just like in Katamari Damacy, The Prince is sent to Earth to roll Katamaris to replenish the stars that have been destroyed by his father during a crazy night out.

Seen as the only playable character in the game, The Prince must complete puzzles in the game set by his father and put stars in the sky.

The Prince is the only playable character in the game, sent by his father to roll Katamaris as large as possible in order to make up for creating black holes down on Earth.

Only playable character in this game, but still able to complete tasks and make a Katamari as large as possible.

An Apple a Day Keeps the Doctor Away

The Prince rolling an orange ball.

The Prince in a ball in the tutorial in Beautiful Katamari.

The Prince in the Danger stages. 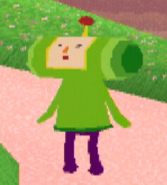 The Prince in the Cousins stage.

A halo on a pure Prince

Get this boy a coat! 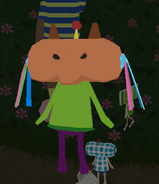 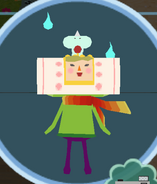 A Prince with skiis 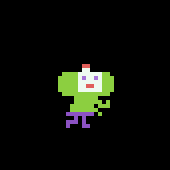 A pixel Prince from Me and My Katamari 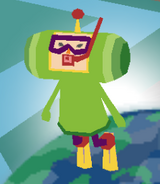 The Prince and birds.

The Steam emoticon of The Prince.

The Prince's appearance in Wattam.

The star-making Prince whose voice is too small to be heard. 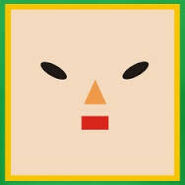 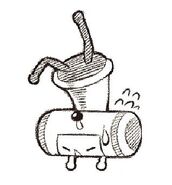 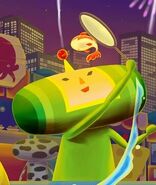 A talented young artist creating a self portrait 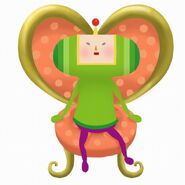 An elegant seat for a regal boy. 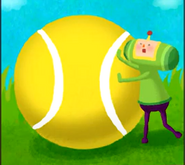 The Prince rolling around Marn...Wait, that's a tennis ball. 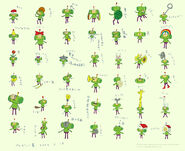 A wallpaper featuring The Prince in multiple accessories.

The prince doing some poses. This image was really hard to find. 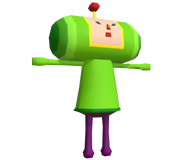 A coloring page of The Prince.

A coloring page of The Prince and his Katamari.

A computer wallpaper featuring The Prince, Peso, and Odeko.

A wallpaper for your computer.

A sticker sheet featuring The Prince.

A wallpaper for your phone.

You can write in what The Prince is saying in the speech bubble.

The Prince being a flexible cheerleader. 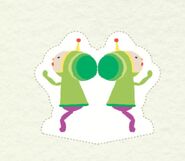 A cutout Prince from the Touch My Katamari OST pamphlet.

The Prince baked you a pie! "Oh boy, what flavor?" 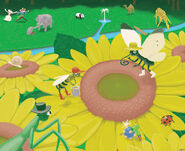 A phone icon of a very buff Prince
Community content is available under CC-BY-SA unless otherwise noted.
Advertisement