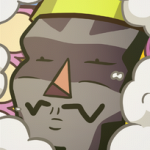 Heyo, I'm Tritnew, but you can call me Miles too. I'm a sort of "expert" with Katamari music and I know a thing or two about my Katamari lore, and I'm now the proud owner and admin of this here wiki.

I'm a pretty chill, calm person with a weird sense of humor and a love for weird Japanese games that don't get talked about much (like Katamari or PaRappa) and just games in general, and music too.

I've played the first three Katamari games, and only beat two. I own Katamari Damacy, but I'm hoping to own them all physically, and get the legit systems to play them on. But PCSX2 and PPSSPP will have to do.

I'll try and do as much as I can to help improve and grow the Katamari Wiki, and if you have any questions about anything Katamari related, especially with the music, go ahead and shoot me a message on my Message Wall!

Love 'em all, but these are my favorites.

I don't play favorites with Cousins generally, I love using them all, but here's my favorites anyways based on designs and cute and coolness factor. Excluding The Prince 'cause we all like him obviously.

Retrieved from "https://katamari.fandom.com/wiki/User:Tritnew0?oldid=12996"
Community content is available under CC-BY-SA unless otherwise noted.