Velvet is a cousin of the Prince. In Katamari Damacy, she has no visible legs. From We ♥ Katamari onward (excluding Touch my Katamari), she has prosthetic legs which make her taller. It is possible that she is UFO themed.

Velvet floats in the air without any legs.

Velvet now has a pair of red legs from here until Touch My Katamari.

Velvet now has two globes on her chest that act as a pair of breasts, and she now has no legs. This design is a fusion of her and Drooby.

Where/How to Find: Make a Star 9 - Lining up in the middle of the schoolyard.

Description: So haughty that she actually floats 2cm off the ground.

Where/How to Find: Old Lady (As Large as Possible 4) - Standing on top of a shark in the ocean. furniture. (Must roll Miki first).

When Rolled Up: Oh!! You just rolled up some weird UFO thing! Wait..it's cousin Velvet! Oh, stop getting in the way!

Stage Conclusion: "Oh, it's cousin Velvet. What were you doing on Earth? Hmm? You were making friends with the shark? We have no idea what you're talking about."

Where/How to Find: Strawberry City - Beyond 4m barrier and she's walking on the road.

When Rolled Up: "Hmm? We feel something mellow... It's cousin Velvet! Out and about?"

Where/How to Find: Chatéau Notre Desir - Under the fire place (try not to pick up anything on the way because the spot where she is hiding is very small).

Cousin Leaderboard Description: A cousin who's always in a rich mood. She's mature and speaks in a relaxed manner.

When Rolled Up: "Hm? Something swanky...It's Velvet! We asked you to embroider our slippers!"

Where/How to Find: Make a star 8 - Standing on top of a daruma body and a tea cup near the table and ironing board.

When Rolled Up: "What was that weird skirt just now? Oh it's Velvet!! Those are some pretty odd feet..."

Stage Conclusion: "Oh, it's Velvet. This is the bee's knees! I'll just put you in the Village Square."

Where/How to Find: Make it Big 4 - On the table to the left immediately past the 20cm barrier.

Stage Conclusion: "Goodness gracious! Look at this! Velvet is stuck on the Katamari! It's dangerous for you to be here, little one."

Sending her back to space.

Velvet all by herself. 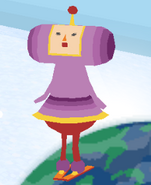 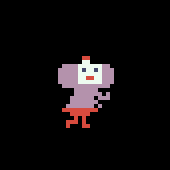 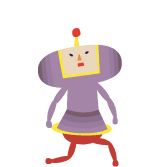